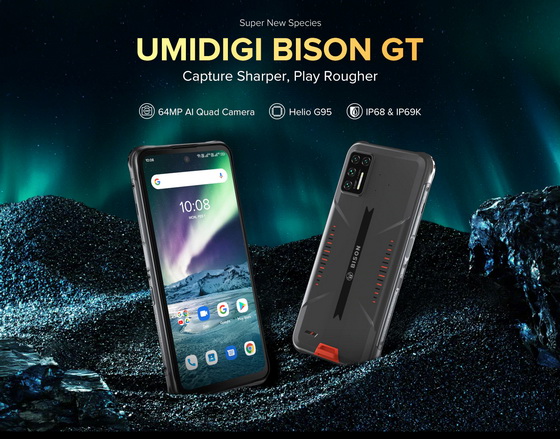 – UMIDIGI BISON GT will be the company’s new rugged flagship, launching this week.
– The BISON GT will feature a 64MP quad rear camera setup, a 32MP selfie camera, and a hole-punch display.
– The phone will be powered by MediaTek Helio G95 and support 33W fast charging.

UMIDIGI BISON GT will be the company’s new flagship rugged smartphone that’s set to launch this week. With the success of its rugged phone UMIDIGI BISON, the company is looking to expand further and create a more powerful midrange flagship to meet users’ needs. Several leaks and rumors have popped up since then to help us with the upcoming flagship. And we will tell you everything we know about the device ahead of the launch.

According to the leaks, the BISON GT will feature a hole-punch display with a high screen-to-body ratio. Within the hole-punch cutout is the 32MP front camera. On the back, the phone will sport a 64MP quad-camera setup.

Under the hood, there will be a more powerful MediaTek Helio G series chipset than Helio G90T, which could be the Helio G95, the same one as Realme 7’s. The Helio G95 is a powerful midrange SoC with about 300,000 benchmark on AnTuTu. And the leaked image reveals the BISON GT could feature 33W fast charging.

Notably, the BISON GT may be the first UMIDIGI smartphone to come with the X-axis linear motor, the best motivation motor, which can definitely offer a better motivation experience than its old models.

The BISON GT will go official later this week and the price is expected to be under US$300. We will keep you updated once the phone launches.